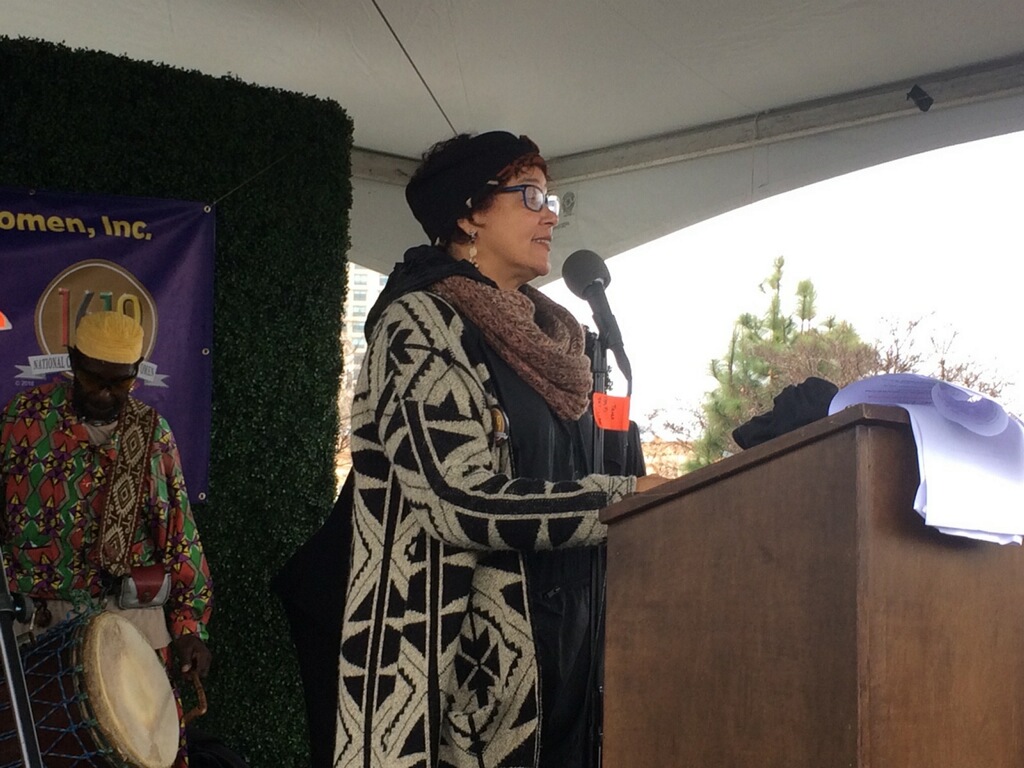 But what does that mean?

A journey we did not ask for.

A story of pain,

A story of hope,

It is yours and it’s mine,

It is right and it’s wrong.

Women and men and little children

Our strength helped us survive in this new country

This land of the free

Has been and still is a dichotomy

We stand on the shoulders of our ancestors

We knew that the power was in our very blood

And we were not going to let this journey drive us into the mud.

The life of slavery

Was a human atrocity

1746 Lucy Terry, who was sold into slavery as an infant,

and wrote the first poem we know about back then.

Followed soon after in 1773

Books of poems were published by the prolific Phillis Wheatley

They move to the melody of their very own song.

The voice of Sojourner Truth proclaimed “Ain’t I A Woman?”

And in 1863 President Lincoln signed the Emancipation Proclamation, freeing millions and changing the nation

We moved forward, to schools to better jobs to new situations,

It was the precursor to the great migration.

Charlotte Ray was admitted to the Washington, DC bar; in 1872

she graduated that year from Howard University yes –“H. U.”

A door had been opened, things weren’t like before

We invented things, we became teachers, and nurses and more

When she founded the Daytona Normal and Industrial Institute to educate black girls and served as its president in 1943.

becoming the first American women to become a self-made millionaire.

Rosa Parks’ refusal to give up her seat,

Started a movement to desegregation,

That changed the nation.

all the way to the March on Washington.

It was time to show the world who we are

from athletes, to politics, to reaching the stars

Katherine Johnson helped to send America’s first human spaceflight to the moon to earn her place in history.

Shirley Chisholm was the first to be elected to the U. S. House of Representatives, serving us with a heart of resilience

She also went on to make a run for President

Carol Moseley Braun was elected to serve in the U. S. Senate, she was so brilliant and clever.

Forward was the only way to make up for lost time

There was no mountain too tall for us to climb

Jocelyn M. Elders was appointed as the U. S. Surgeon General.

Toni Morrison wins the Nobel Prize in Literature for Beloved, her novel.

Serena Williams won the U.S. Open Women’s Singles Tennis Championship which was just the beginning, she moves on and to this day she just keeps on winning.

The living legacies of Mother Africa

The pride of our Grandmothers

We know how to keep our eyes on the prize

And as Dr. Maya Angelou stated

We have a DNA strand of creativity

We have a purpose, a plan, we have super powers

Because we are the seeds that were planted

Together we will bloom into a million magnificent flowers.

On behalf of the Sempra Energy HQ LDIC, I want to thank you so much for speaking at our Black History Month Lunch-N-Learn today!  It was such a pleasure meeting you both and your engaging presentations were fantastic!  Being able to bring both a local and national perspective on some of the civil rights struggles of the past and what work is still to be done was valuable and informative.  I hope our paths will cross again in the future.