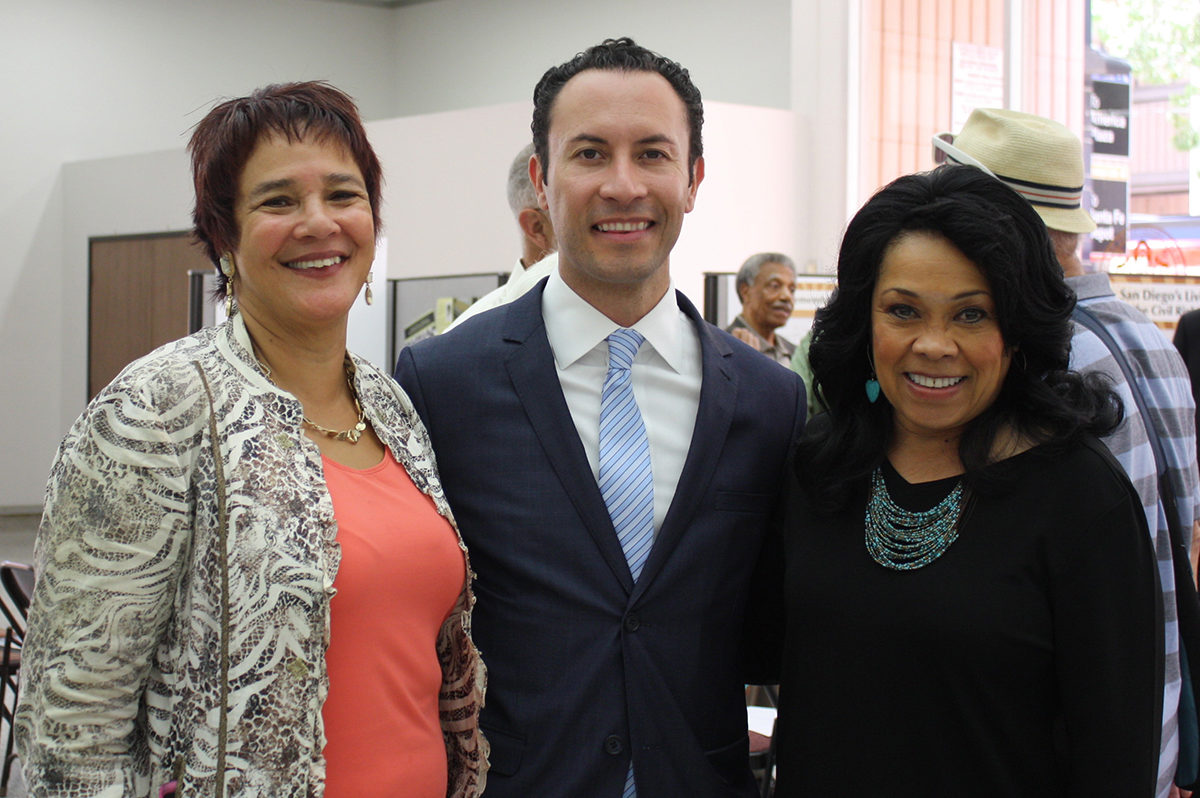 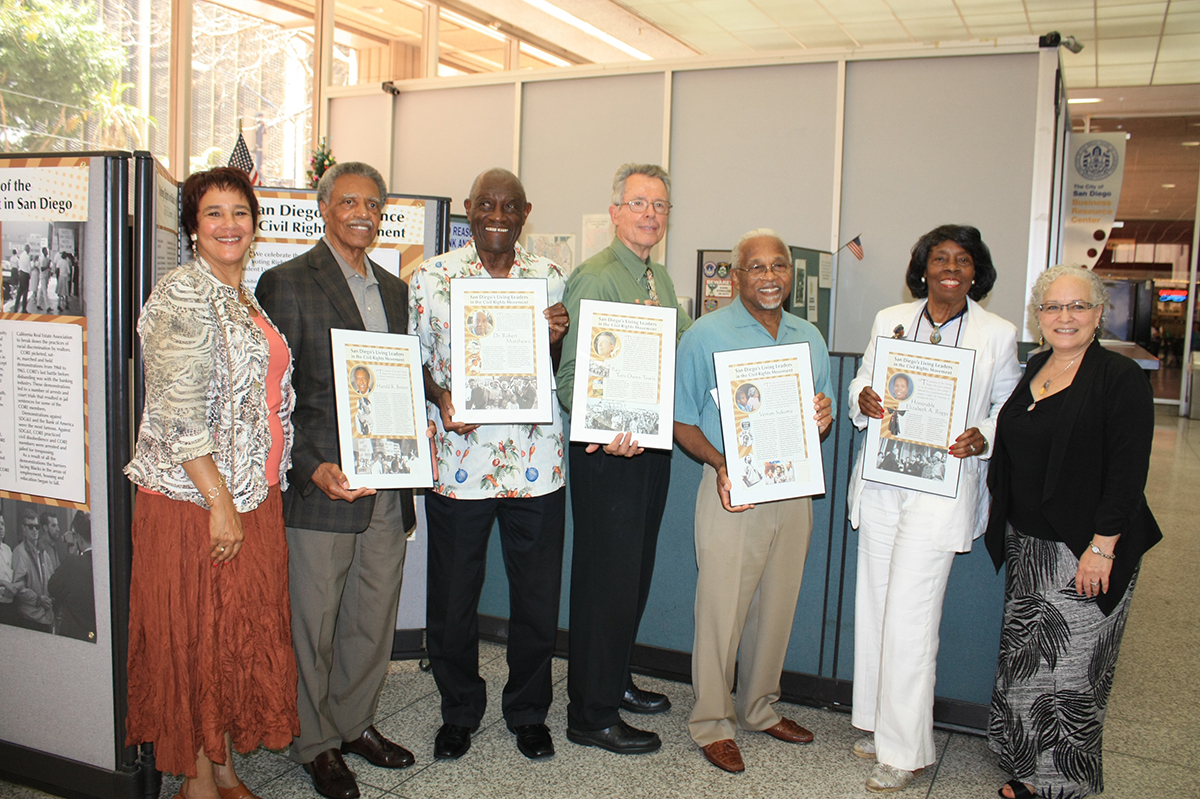 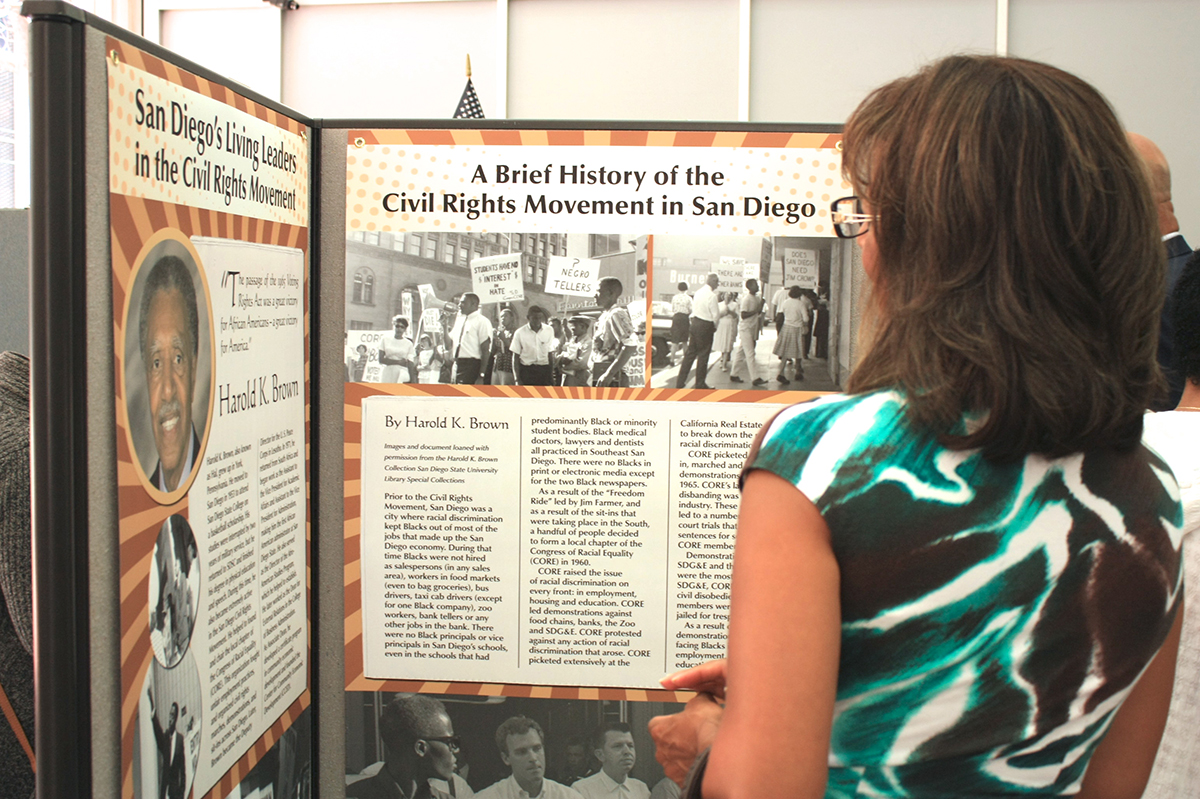 Angela Rickman, a guest at the opening reception, views the exhibit at City Hall

The San Diego Experience of the Civil Rights Movement exhibit had its inaugural display in the main lobby of the City Administration Building, 202 “C” Street, downtown San Diego from Friday, August 7 to Tuesday, August 18, 2015. A public opening reception was held on Friday, August 7, 2015.

That week in history celebrated the 50th anniversary of The Voting Rights Act being signed into law by President Lyndon Baines  Johnson (1908-73) on August 6, 1965. The Voting Rights Act aimed to overcome legal barriers at the state and local levels that prevented African Americans from exercising their right to vote under the 15th Amendment (1870) to the Constitution of the United States. The act significantly widened the franchise and is considered among the most far-reaching pieces of civil rights legislation in United States history.

The exhibit consists of fifteen panels that honor and reflect on stories of our own San Diego civil rights history, and honors San Diego’s living leaders in the Civil Rights Movement. The exhibit showcases some of the leaders, from those who organized the Congress of Racial Equality movement in San Diego to our local leaders and changemakers who took the first steps in the long journey of standing up for justice.

This exhibit was created by Leah Goodwin and is dedicated to her father, James C. Goodwin, Tuskegee Airman, who flew in the 332nd, and led a life dedicated to civil rights, social justice and peace, for instilling in her the knowledge and pride in history.

For more information, please contact Leah Goodwin at (619) 840-1206 or leah@leahscreations.com.

The Civil Rights Exhibit is dedicated to James C. Goodwin, Tuskegee Airman, and father of Leah Goodwin, creator of the exhibit

EMAIL LEAH NOW TO RESERVE THE EXHIBIT AT YOUR VENUE